A Taste for Monsters 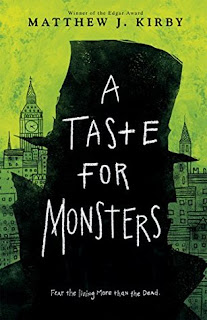 A Taste for MonstersBy Matthew J. Kirby”I woke up next to a dead woman. A black fly rested on her open left eye, straddling her lashes …” With an opening like that how could I resist? I am a fan of history, strong female leads and horror; A Taste for Monsters has it all.

Set in 1888 London our lead, Evelyn, is out of work and on the streets after becoming disfigured in a fire at the matchstick factory where she worked. Looking for a place to hide from the cruel streets she gets a job working at a hospital as the caregiver for Joseph Merrick, otherwise known as the Elephant man. While most people turn from her disfigurement in disgust, Evelyn finds a kindred spirit in Mr. Merrick.

A combination of historical fiction, horror and mystery this tale of a young woman in the late 1800’s intertwines historical facts with spirits and haunting that bring the unlikely pair into the folds of the Jack the Ripper murders.

This story does not shy away from the harsh realities of London’s White Chapel district in the late 1800’s; prostitution, desperation and death are all on display in the streets. Kirby describes the plight of a woman without position and the cruel treatment of a man with a life threatening disfigurement. As these themes lend themselves to a dark and layered story, this book is not for the faint at heart.

Author Matthew J. Kirby is the winner of the PEN Literary Award for Children’s and Young Adult Literature and the Edgar Award for Best Juvenile Mystery.