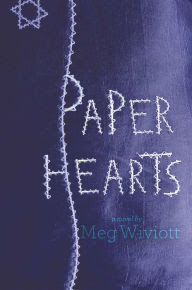 A birthday card. Something simple, a sign of affection and love that we take for granted.  But for a Jewish prisoner at Auschwitz in 1944, a birthday card is so much more – an act of defiance, a statement of hope, a crime punishable by death.  Zlatka knew this as she stole and bartered for the supplies needed to make a card for her best friend Fania.

Based on true events, Paper Hearts is a Holocaust story told in verse.  Fania and Zlatka are two Jewish teens who have lost everything – family, home, possessions.  Brought together during the horrors of the Second World War, they become best friends.  Their friendship and refusal to become victims help them both survive.

The story covers quite a bit of ground – from the early days of the occupation, families crammed together in ghettos;  to the disbelief that people felt as the ghettos were cleared and people were transported away; the terror and fear as families are separated, people packed into cattle cars to be transported to concentration camps; the selection process once at the camps, where the sick and weak were culled out right away;  the day-to-day horrors of living in the camp and working at a munitions factory as slave labour, making bullets and bombs that will help kill people who are fighting against the people imprisoning you; to the grueling death march before liberation.

This is a quick, but heartbreaking read.  Be sure to have your tissue box handy.

Fania managed to hide the card that her friends made for her, and it is on display at the Montreal Holocaust Memorial Centre.

Other World War II stories: The Boy in the Striped Pajamas by John Boyle; The Book Thief by Marcus Zusak; Prisoner B-3087 by Alan Gratz.

Other realistic stories in verse: The Crossover by Alexander Kwame; October Mourning: A Song for Matthew Shepard by Leslea Newan; The Gospel Truth by Caroline Pignat.