Leonard, my fifty-year friendship with a remarkable man 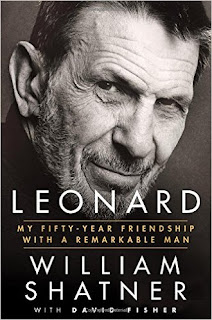 As a child I used to watch old re-runs of Star Trek and wish for the time when there was such a crew of great men and women that would keep peace all over the universe. My two favourite characters have to be the stoic and calm Mr. Spock and the brave and handsome Captain Kirk. Upon Leonard Nimoy’s passing I found I was quite upset, it is strange how a television character can become like a friend, someone that you grow up with. Leonard, My Fifty-YearFriendship With A Remarkable Man is William Shatner telling stories and anecdotes of half a century of television, movies, directing, conventions and great experiences. From their first encounter on the television show The Man from U.N.C.L.E. to decades of Trek stardom. Shatner has done a beautiful job of bringing together heartfelt stories and biographical information about Nemoy and their friendship.

For the Trekker or Trekkie (whichever you prefer) in all of us may this wonderful book ensure that the man behind the iconic character of Mr. Spock will “Live Long and Prosper” for generations to come.