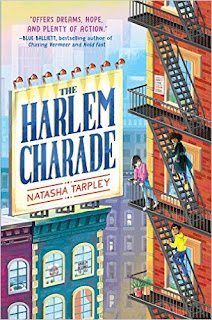 A mystery with history, The Harlem Charade unites three very different kids who must solve a brutal attack on a senior while tracking down some precious paintings that could help save their Harlem neighbourhood.

Jin is being raised by her grandparents and spends a lot of time in their bodega (corner grocery store) while recording everything that goes on around her in a notebook. Elvin has come to Harlem to stay with his grandpa while his mom undergoes cancer treatment back in California. Jin’s classmate Alex wants to make a real difference in her community and although she comes from privilege, she hides her true identity through good deeds.

Jin pairs up with Alex to work on a class project showcasing their neighbourhood’s history and culture. She also becomes aware of Alex’s selfless acts towards the community and with a little persistence she convinces Alex to bring her along on her next mission to deliver donated food to the local women’s shelter. As fate may have it, they meet Elvin through an altercation and decide to help him because he is on his own ever since his grandpa was mysteriously attacked and left in the hospital. Elvin’s grandpa has a strong connection to Harlem, particularly the Harlem Renaissance movement in the 1960’s so he may have information about some missing and highly valuable paintings. There are many characters, some devious, that want to get their hands on those paintings to advance their agendas, especially when it comes to neighbourhood re-development. Jin, Alex and Elvin will have to be careful with their search for the paintings and bring Elvin’s grandpa’s attacker to justice.

The author includes information about Harlem’s African-American history and the significance of the Harlem Renaissance to highlighting black artists and the civil rights movement.