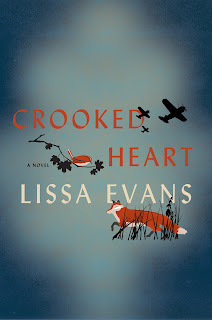 Lissa Evans’ “Crooked Heart” is a startlingly funny odd-couple story set against the backdrop of World War II London. It follows Noel Bostock, a ten-year-old orphan being raised by his anti-authoritarian suffragette godmother, Mattie. She isn’t a particularly affectionate woman, but she does adore him and maintains his education from home. As the novel begins, Mattie is suffering from dementia’s rapid disintegration and refuses to acknowledge the steady arrival of war.

Noel is incapable of relating to his peers, having spent most of his life in the company of a bookishly independent woman. He is a solemn little boy, with a gimpy leg and a tendency toward spending his time alone with books or writing about his peers in a self-made code.  As Mattie’s condition worsens and the war grows closer to home, he is evacuated to a small city north-northwest of London, and is taken in by a poor thirty-six year old widow, Vee Sedge. Vee lives with a silent mother and unappreciative son, both of whom are completely oblivious to how much effort she has put into sustaining them. She moves from a get-rich-quick scheme to factory work with no real luck, and for her money has always been elusive and difficult to keep. She is considered too and lacking the finesse her latest scheme requires.

Noel invites himself along on one of her cross-London schemes and Vee realizes how much help the clever, organized young boy can actually be. But Blitz-era London can be a very dangerous place, and Noel’s imagination and lack of life experience lead him and Vee on a strange and occasionally violent journey.

This book combines a brilliantly dark wit with memorable, endearing characters and by the end I found myself rooting for the two of them despite (or perhaps because of) their various, well-developed flaws. The burgeoning friendship between Noel and Vee never feels forced or trite, instead Evans allows it to flourish in a way that makes sense for each character. The humour throughout is steady and constant, never over the top but serving instead as a heartbeat that twines itself through the ridiculousness of their circumstances.

The pleasures of this novel sneak up on you, but they linger.