Odd Man In : Hockey’s Emergecny Goalies and the Wildest One-Day Job in Sports 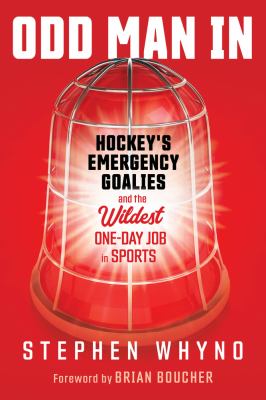 Pro athletes are a rare bunch.  Only a fraction of a fraction of a fraction of players can make it to the Big Leagues of their chosen sport, an elite few who have excelled for long enough and are dedicated to honing their craft for their entire lives. You make it, you get paid to play the game you love, and you live with the adoration of your home team fans.

But most people don’t make it.  You are good, but not quite good enough to get the attention of the coaches, scouts, and managers, so your life takes a different path.  Maybe you play recreationally, but you go home to your families, go to work at the accounting office, and live the same lives as the rest of us.

…except you get a call: the NHL game tonight needs you in net.  Right now!

Pro hockey has a weird rule:  every team needs to provide an extra goalie, just in case.  They can’t be a member of your team, and they can’t be a professional under contract with another team.  But in the event that both goalies on either team, home or away, gets hurt, this spare goalie gets put in net. Usually, they are true amateur, someone who usually has never gotten further than college or junior.

Odd Man in: Hockey’s Emergency Goalies and the Wildest One-day Job in Sports by Stephen Whyno tells the history of how this unique job came to be in the NHL and the stories of the handful of people who were lucky (unlucky) enough to get called into net against the best of the best in hockey, facing the full force of superstars like Auston Matthews and backstopping legendary teams like the Chicago Blackhawks.

Stephen Whyno conveys the thrill and magic of suddenly hitting the biggest stage in hockey in a relatable way, really showing us how it felt to get the call in.  The excitement, the nerves, the terror of facing 100mph shots.  Any sports fan or someone who likes fun, heartwarming stories will enjoy Odd Man In.