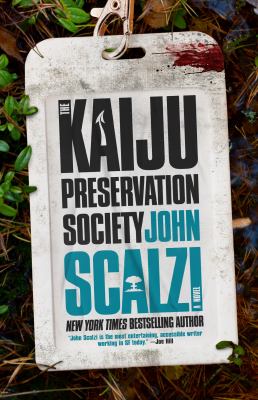 Sometimes you need to turn off your brain, whether you are a reader or the writer.  In his note at the end of The Kaiju Preservation Society, author John Scalzi explains why this was the book he wrote instead of a heady science fiction novel of big ideas: he’d had a rough year, what with the US elections, COVID, and just the general state of the world.  After many attempts, he gave up, changed gears, and put together some silly fun.

And that’s what The Kaiju Preservation Society is: silly fun.

You probably have heard of Kaiju before, just maybe not with that name.  Most famous is Godzilla, the giant lizard famous for stomping through movies in cities around the world (including one filmed in Steveston a few years ago), but there’s lots of huge monsters from stories around the world. Scalzi plays with these monsters, imagining where they come from and why they rampage.

Set in the early months of the COVID outbreak, The Kaiju Preservation Society’s Jamie Gray finds himself fired from the upper levels of a big Uber Eats-style tech company in New York City only to end up working as a delivery driver for them out of desperation.  He’s saved from this challenging (and low paying) work when one of the customers hires him for a special job: travel to a secret undisclosed location and help maintain a facility to study and protect the world from Kaiju.  When he arrives, he finds himself in a world he never imagine existed, full of weird monsters and bizarre plants and animals.

I don’t want to say Scalzi wrote this with a movie adaptation in mind (and as far as I know there isn’t one planned) but it was definitely written with the pacing of an epic action movie, including the quips and one-liners we would expect from a summer blockbuster.  There’s monsters! Explosions!  Megalomaniacal villians! Ripped-from-the-headlines commentary and references!

The story moves fast.  There are no wasted moments.  It’s a great palate-cleansing read when you just want to shut your brain down for a bit.