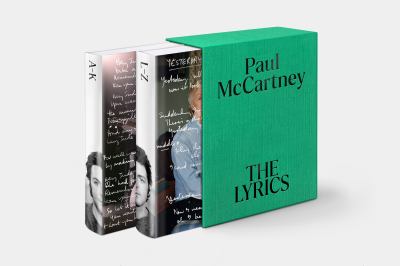 I was born 10 years after the Beatles broke up. My prime music listening years were the ‘90s, but my tastes were firmly stuck a generation behind, with the Moody Blues, Fleetwood Mac, the Who, the Guess Who, and of course, the Beatles being among my favourite bands.  While I’ve read plenty of books about those bands, it’s not all that common to read books by the people in them.  So Paul McCartney’s The Lyrics, 1956 to the Present, a two volume set, is a rare opportunity of direct insight from Paul himself.

As much as I like Paul McCartney I have to admit that I feel like a lot of his post-Beatles work is a bit corny.  His love songs seem a bit, well, silly.  But upon reading this book I realize that he never really cared about being silly.  He writes from the heart, whatever feels right, even if the lyrics don’t always make sense.  And, to quote his hit “Silly Love Songs”, what’s wrong with that? If it works, it works, and it’s hard to argue with one of the bestselling songwriters of all time.

While all of his songs are printed in these two volumes, it really isn’t an explanation of his lyrics or an analysis of their meanings.  It’s really a memoir, each song like an entry into a sort of journal.  He talks about what might have inspired a given phrase, or who he was with when he wrote it.

A lot of McCartney’s songs just don’t make sense when you look at the lyrics without the context he gives in the memoirs, but his natural skill with melody and rhythm carries even the oddest phrases.  The extra layer of knowing (for example) he was living in his girlfriend’s parents’ attic suddenly helps explain why songs turned out the way they did.

The Lyrics, 1956 to the Present is a great read for any Beatles and McCartney fan.  It’s hard to believe that even 60 years later we’re still learning new things about them.