And Then It Happened 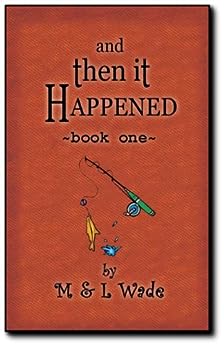 And Then It Happened                By M & L Wade“…After dinner that evening, we had a large bonfire and the Head Counsellor read us some really hokey, kiddie stories… until Gordon interrupted and asked if he could tell a story.

The Head Counsellor smiled and said, ‘Sure, go right ahead.’

I chuckled quietly to myself. The Head Counsellor did not know Gordon like we did.

Clearing his throat, Gordon stood up and said in a loud voice, ‘This is the story of the bear and the rabbit.’  The Head Counsellor looked pleased. ‘One day,’ continued Gordon, ‘a bear and a rabbit were walking in the woods.  Suddenly, they both had to go to the bathroom.’ The Head counsellor’s smile disappeared. ‘After they had both gone to the bathroom, the bear asked the rabbit, ‘Do you have a problem with poo sticking to your fur?’ ‘Not at all,’ replied the rabbit.  ‘Good,’ said the bear, and he grabbed the rabbit and wiped his butt with him!’

Laughter and howling erupted around the campfire.  Kids cheered and yelled, ‘More! More!’  The Head Counsellor, however, was furious and sent all us campers to bed early, which was fine by us.” ( Book One, p. 24-25)

And Then It Happened is a series of stories involving a boy and his two friends, Paulo and Gordon.  The boys are off on adventures ranging from leaving dead birds on their elderly neighbour’s lawn, to causing an egg fight at school, to saving their favourite turkey, Spot, from being Thanksgiving dinner.  Each story is more hilarious than the next!

Boys will love reading about the antics of other boys who are known for wreaking havoc!  There are 11 books in the And Then It Happened series, which will appeal to both avid and reluctant readers.