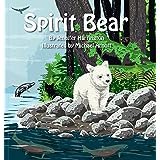 Annuk is a baby bear, born to a black bear mother.  Deep in the Great Bear Rainforest, Annuk discovers that he is special; unlike his siblings, Annuk is a white “Spirit Bear”.  His mother tells him that one day, he will “catch more salmon than any bear in the forest.”

While fishing in the river, Annuk becomes separated from his family. Despite being a young bear, he must navigate the wilderness and both friends and foes to find his way home.  Encountering a series of animals along the way, Annuk leads us through the diversity of a British Columbia forest.  Foxes, wolves, turtles, eagles, whales and wolverines abound.

Spirit Bear is the archetypal story of a child who has lost his mother and must face dangerous odds to find her again.  This is the child’s survival story, where separation from the parent is a terrifying prospect.  But Annuk is clever, and demonstrates that he, like all children, has the internal resources to persevere.

This book is also a celebration of the diversity of the British Columbia forests, raising environmental awareness and drawing attention to the Gitga’at people.  After the story, Harrington has included some information about the Gitga’at First Nation, explaining its people’s belief that “the spirit bear has supernatural powers, and that it is the guardian of the rainforest.”

Award-winning illustrator Michael Arnott also emphasizes the diversity of the rainforest with his brightly coloured illustrations.  A member of the Batchewana First Nation of Northern Ontario, Arnott’s love of nature shines through.

The book also contains information about theSpirit Bear Teachers’ Package, which will be of interest to those bringing First Nations and environmental concerns into their classrooms.

This picture book will appeal to 4-8 year olds.