SuperCat vs. the Chip Thief 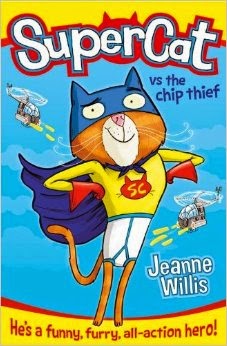 He’s not your average kitty-cat. He is Supercat! After licking a left-over oven chip from a moldy sock, Tiger the cat develops super powers. Now he can reach new heights, strum the guitar and speak English, French and Spanish. When his best mate James (a human boy) finds out they decide to keep his new abilities a secret. They will both pair up and become the latest superhero team fighting crime in their London neighbourhood. Not a moment too soon news arrives that potatoes have been infected with a plague and soon the world will run out of potatoes. It is up to Supercat and James to find out who created the potato plague and rescue the remaining potatoes before there are no more for potato crisps and fish and chips.