The Thickety: A Path Begins 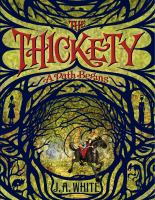 Kara Westfall is a witch – at least that’s what the townsfolk keep telling her.  Her mother was a witch too, although Kara doesn’t remember any magic or spells.  She does remember a loving mother whom she misses very much.

Kara’s mother’s legacy and reputation as a witch keeps Kara an outcast as she grows into her teenage years.  Her father can barely function since Kara’s mother died, so Kara runs the household.  She is the primary caregiver for Taff, her younger brother – and she would do anything to keep him safe.

The Westfalls live on an island and all the residents keep themselves separate from the rest of the world.  At the edge of the island lies the Thickety, a dense forest that constantly encroaches on “civilized” territory.  The islanders fear the Thickety, and its evil magic.

Although Kara must contend with disdain from all the villagers, her most vicious enemy is Grace Stone.  Grace is beloved by the people of the town, but Kara knows her for who she truly is: a bully who will do anything for power.

When Kara finds her mother’s grimoire, or spellbook, she learns that she is indeed capable of casting spells.  Her spells usually involve commanding the animals around her to do her bidding.  Kara has no evil intention, but she starts to become obsessed with magic… and her grimoire.  She can’t let anyone find it or take it from her.

Then the unthinkable happens: Grace finds the grimoire.  And both Kara and Grace uncover a terrible secret — Grace is a witch too.  Her ability to cast spells and her quest for power brings evil to the town.  Only Kara can save the villagers who have always cast her out.

First in a series of four books, The Thickety is written like a fairy tale.  It’s full of witches, spells and magic, as well as righteous folks who fear that magic and feel they must drive it from the island.  If you love this kind of fantasy story, immerse yourself in The Thickety!