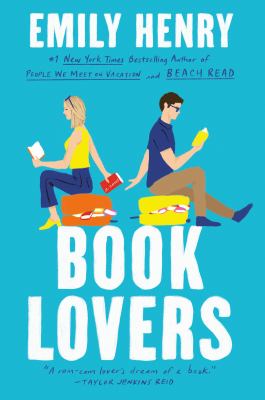 When the outside world gets busy and requires a little extra brain power, it’s nice to have a straightforward read to pick up at the end of the day. Emily Henry is known for her reads-like-a-rom-com narratives, easy to become immersed in without demanding any excess energy. Book Lovers is no exception.

Nora Stephens has devoted her whole life to stories – that is, those that other people have written. A literary agent whose career thrives where her personal life fails, Nora is married to the books that she finesses. She is a heroine for the authors under her wing, but when it comes to her own relationships? Let’s just say they are worth leaving on the shelf. When her younger sister Libby jets Nora off to picturesque (ish) Sunshine Falls in a desperate plea for a sisters-only girls trip, Nora agrees, thinking it may be her only chance at any semblance of a personal life. Enter Charlie Lastra, dashing book editor extraordinaire…and Nora’s apparent nemesis. À la Bewitched, and despite their clear disdain for one another, Nora and Charlie bump into each other again…and again…and again. Through a series of coincidences found in only the most fantastical of novels, Nora and Charlie start to wonder if there could be something to their mysterious meet-ups. After all, isn’t that how the best stories begin?

Emily Henry has done it again with a charming read that is as entrancing as it is uncomplicated. This is a book for those looking for an easy read that they can pick up and put down without any emotional effort. This book speaks to the romantic in every reader without being saccharine, as Henry does so well. If you are looking for a laugh-out-loud, simple romance that will leave you feeling full from beginning to end, check out (yes, that was a library joke) Book Lovers.