Book of the Month: January – Dorothy Must Die 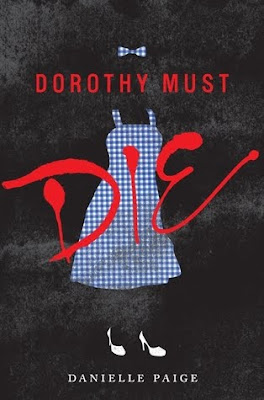 By Danielle PaigeWe’ve all heard the tales. Dorothy, a simple farm girl from Kansas and her peppy little dog Toto, are whisked away by a tornado to a magical land called Oz. There she meets a strange assortment of friends, and in a deal with the Wizard of Oz she battles the Wicked Witch of the East and as a reward is sent back to Kansas. Or, at least that’s what Frank Baum wants us to believe…

Finally, we have the true tale of Dorothy who overthrew the Wizard of Oz and now rules with a fury that would make Alice in Wonderland’s Queen of Hearts seem like a pacifist. What about Scarecrow, Tin man, and Lion? Scarecrow is a mad scientist experimenting on monkeys, Tin Man has knives for fingers, and Lion kills his foes by absorbing their fear. Magic is strong in Oz.

Along comes Amy, another girl from Kansas. She’s no farm girl, but rather she’s a strong-willed teenager from the local trailer park. One night Amy, along with her mom’s pet rat, is whisked away to Oz where she’s recruited to take down Dorothy and restore peace.

To do so, Amy will have to undergo rigorous training to use weapons and magic. Guided by the Revolutionary Order of the Wicked, a trio of witches and an assortment of teens, Amy reluctantly takes on her task in hopes to get home.

This is a fantastic retelling of an age-old classic that both those familiar and unfamiliar with the original story will enjoy. It’s gritty, violent, and yes there’s a touch of romance without it being center to the story. Highly recommend.

There is a prequel (e-book only) called No Place Like Oz, and three sequels, The Witch Must Burn, The Wizard Returns and The Wicked Will Rise. Other books like Dorothy Must Die: Cinder by Marissa Meyer, The Ring and the Crown by Melissa de la Cruz, and The Iron King by Julie Kagawa.