Book of the Month: November – Salt to the Sea 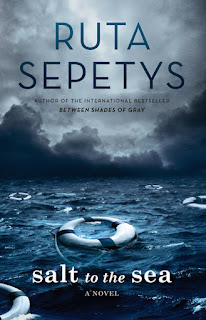 by Ruta SepetysIf you’re like me and love historical fiction, you must give this one a try. Salt to the Sea knocks it out of the park with its combination of interesting characters, mystery, suspense and heartbreak within the context of one of the lesser known tragedies of WWII.Have you ever heard of the sinking of the German ship MV Wilhlem Gustoff, hit by a Soviet submarine in the Baltic Sea in 1945? Over 9000 refugees died, of which approximately 5000 were children. That is six times more deaths than the sinking of the Titanic, making it the largest loss of life in a single ship sinking in history. I’d never heard of it either – shocking, isn’t it?In this book, we follow four teens from different backgrounds as they desperately seek passage on the Wilhelm Gustoff, in hopes of escaping the horrors of Stalin’s advance into Germany and their war torn lives at home. Each character has their own unique story and tragic past that they are trying to keep secret. As their lives converge, we follow them and the rest of their unlikely travel companions on a suspenseful journey to the ship, and then unfortunately, through the greatest maritime disaster the world has seen.If you are into little known accounts of history like I am, I highly recommend Ruta Sepetys’ other two novels – Between Shades of Gray and Out of the Easy. They are equally engaging and well researched. Another great historical novel for teens is A Northern Light by Jennifer Donnelly. Happy reading!