Learning to Swear in America 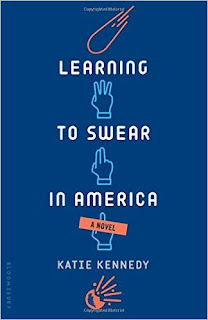 by Katie KennedyAn asteroid is hurtling towards Earth, and NASA has amassed a group of scientists to figure out how to stop it before it destroys North America.  Yuri is a 17-year-old Russian physics phenom who NASA has recruited to be part of the team.  Yuri’s colleagues in Russia are used to his youthfulness, and (most of them) don’t make fun of him anymore.  Not so in California, though – he feels alone and awkward, and the other scientists don’t really believe Yuri knows his stuff, especially since he’s advocating using untested theory of antimatter to make the asteroid smaller.

Enter Dovie, wild, pretty and slightly unpredictable, with a crazy but close-knit family, who teaches Yuri what it really means to be alive.  When Yuri discovers that NASA might not let him return to Russia, Dovie and her brother help hatch a plan to help save him.

Will Yuri and the NASA team be able to stop the asteroid before it makes impact? Will Yuri be able to make it back to Russia?  Read this quirky story to find out!