The Court of Fives 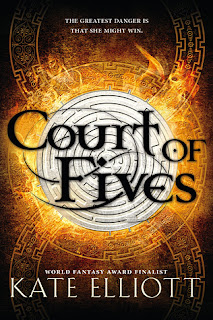 By Kate ElliotAs a child of mixed-race, Jessamy is torn between her duty as a Patron and her longing for the freedom of the Commoners. In particular, Jessamy is determined to compete in The Court of Fives, a dangerous multilevel competition. Through the Fives, Jessamy achieves that sense of freedom and begins making friends such as Kai, a highborn Patron boy. Soon outside forces interfere and Jessamy’s secret activities begin to demand a terrible price as choices of loyalty, love, and honor alter the course of her and her family’s lives and lead her to question everything she once believed in.

The Court of Fives is an entertaining and refreshing novel with an exciting plot and an easy style of writing that makes it smooth and relatively quick to read. Kate Elliot has challenged many of the tired clichés we’ve all come to expect from a dystopian teen novel and created a plot-driven Sci-Fi/Fantasy novel where honor and competition take priority over romance, a subtle touch of magic is intertwined with religious elements, and the unlikely heroine is at times thoughtless, selfish, and overly ambitious. I was hooked almost immediately and I found the plot twists to be genuinely unexpected and emotionally charged.

On the negative side, I have seen better world-building. Some places, traditions, and events are described with a confusing amount of detail, while others are barely explained at all. However, I have always cared more about characters than setting, and Elliot’s characters are believable, if not always admirable, so I stayed interested and invested despite skimming through the occasional paragraph. I am also looking forward to seeing how the series might develop as I anticipate that it will pull back a little from Jessamy’s rather narrow world and to begin to address, and even combat, the brokenness and injustice of her society as a whole.

A few minor flaws aside, The Court of Fives is definitely worth a read, especially for die-hard dystopian fans who have been searching for a new favorite since The Hunger Games. This one will still give you that strong, flawed female lead as well as plenty of action and intrigue, but everything else will keep you guessing.