The Girl from Everywhere 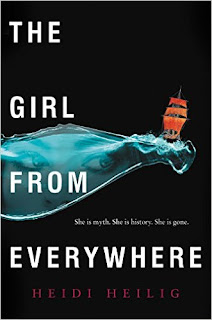 by Heidi HeiligNix has spent her life sailing aboard her father’s ship, the Temptation.  It’s not your average boat, though.  As a Navigator, Nix’s father can steer the Temptation through space and time.  As long as he has a map, he can take them there – even fantastical, supposedly imaginary places.     Nix has spent the last 16 years traveling back and forth through time as her father desperately tries to get back to the love of his life, Nix’s mother, who died in Hawaii in  the 1860s.  If he succeeds, what will happen to Nix?  Since her mother died in childbirth, what does that mean for her very existence?Nix’s father gets an offer he can’t refuse – the promise of a map that is from exactly the place and time he wants to return to.  But can you actually go back and change the past?  At what cost?  This book is an intriguing combination of fantasy, time-travel and historical fiction with a bit of romance thrown in.      The sequel, The Ship Beyond Time, was released earlier this year.