We Are All Made of Molecules 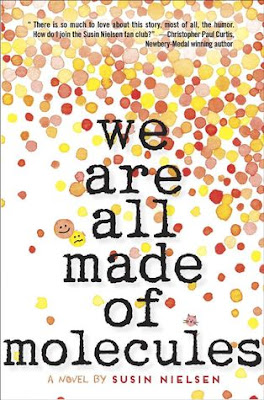 Stewart, the 13-year old narrator of this tale, is struggling with the death of his mother (and perhaps with his father’s complete acceptance and healing from it). He is socially inept but brilliant in academic ways. He has been in a special school for gifted children where he has excelled, and has a very close relationship with his dad. After his mom died, he still feels her molecules within their home.

Stewart`s one wish was for a sister, and it has finally come true, after his mother’s death, when his father decides to move in with Caroline—a woman he works with (who was acquainted with the recently deceased mother) and has been dating. With all of the tragic changes going on, Stewart has decided that he’d like to attempt regular public school, where he is bumped ahead a grade so that he will be challenged by the material.

Ashley, Stewart`s new stepsister, is also a narrator of this tale. In a he said/she said format similar to Flipped (Wendelin Van Draanen), Ashley tells us of the many problems of her own. Her social status at school is precariously kept in balance by the secrets she holds about her parents’s divorce. (Her father is homosexual, and she isn’t sure that she’s completely okay with that) and, due to the out of whack housing market in Vancouver, BC, he’s forced to live in the lane-way house behind their home.

This is a novel of a blended family and two teens working through school, family, and personal issues. There is content in it that may be disturbing to some, but when you read a book by Susin Nielsen you have to expect controversial issues. We Are All Made of Molecules is no different, beginning the book with a mom dying of cancer, then dead from cancer, next a grieving single dad, and his grieving son. It may be for some that the book suffers from too many issues, and the suspension of disbelief becomes difficult when the dad completely gets over the death of his wife in so little time. However, Stewart and Ashley are characters that easily grab your heartstrings and within a few chapters you`ll find yourself rooting for them.

Susin Nielsen won the Governor General’s Award for the Reluctant Journal of Henry K. Larsen (Tundra Books, 2012), and many may remember her as both a writer for and actress in the Degrassi Junior High TV series of the 80s.We Are All Made of Molecules has been longlisted for the 2016 Carnegie Medal.