We Should Hang Out Sometime: Embarrassingly, a true story 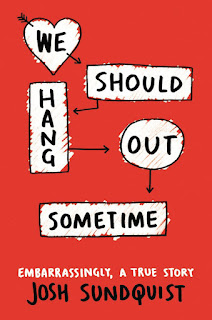 We Should Hang Out Sometime

by Josh Sundquist“When I was twenty-five years old, it came to my attention that I had never had a girlfriend”–the first line of this compelling and occasionally ridiculous true story.Josh Sundquist has written a funny, awkward memoir about his dating (or not-dating) foibles, and has done so with a good balance of hope and frustration.  Sundquist, who is a Paralympic ski racer, YouTube star, and motivational speaker, knows how to endear himself to the reader in a way that doesn’t come across as false- even when some of his dialogue feels way too on-point witty for a teenager. Not all his sentiments about unrequited crushes are likeable, but who hasn’t had a slightly selfish thought about someone they like? In We Should Hang Out Sometime, former romantic entanglements are revisited and analyzed. Sundquist isn’t blaming anyone for his lack of romantic luck, but it is more that he wants to try and understand why something so universally simple for other people is so difficult for him. An amputee cancer survivor from a young age, he revisits the stories of his romantic failures from comically scientific perspectives that include graphs, a hypothesis and follow up investigations. Even as he struggles with issues of fitting in and self-worth, his humour keeps the story flowing in an upbeat way.Funny, easy to relate to, and genuinely very sweet, the book is a pleasure to read as you find yourself rooting for Sundquist to shake off his insecurities and fight for what he cares about. A definite feel-good memoir for anyone who has ever questioned their exact place in the world.