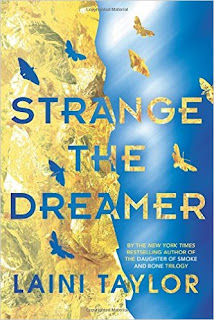 As a young orphan, Lazlo Strange loved nothing more than listening to a good story.  At the monastery where Lazlo was raised, an old monk would tell him countless stories of a wondrous place far from their war torn land. Two hundred years ago this mysterious land of riches was cut off from the outside world by an unknown force. Memories of the land slowly faded to myth, ultimately becoming but a fairy tale to most people. The monk recounted these fairy tales to young Lazlo, until, one day the name of the land was stricken from their minds and Lazlo and the monk could only call it Weep.  For years, Lazlo obsessed over the name of this place but only the name Weep would come to mind.

Through a fortunate turn of events, Lazlo became a junior librarian in his capital city, a place that stored all manner of records on anything and everything, including fairy tales of the lost city of Weep.  Seven years pass and Lazlo, now a young man, has amassed a great wealth of knowledge on the city of Weep.

Enter the Godslayer. After 200 years of zero contact, an embassy from Weep has come to Lazlo’s city to offer the greatest minds of the land an opportunity to solve a mysterious problem.  An opportunity of a lifetime has presented itself, now it’s up to Lazlo to make it happen!  His knowledge of the lost city just might be his ticket to getting into the city itself!  Beautiful narrative and intriguing characters keep you guessing the whole way through.  Weep was a tantalizing enigma that had me tearing through chapters desperate to find out what happens next.